Basics of the Celtic mythology

Basics of the Celtic mythology

Here is some basic information and study sites about the Celtic mythology. If you know any more of the reliable ones, please tell them in the replies and I may update the original post. 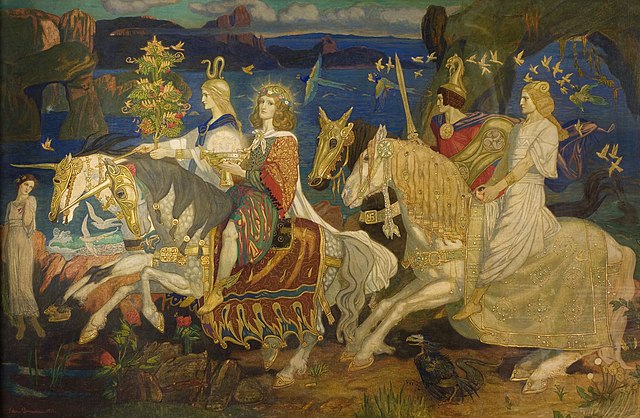 (Riders of the Sídhe by John Duncan)
The beliefs of Celtic mythology likely date back to 500 BC and earlier. While hearing the word "Fairy" many have the impression of the winged creatures like presented in A Midsummer Night's Dream by William Shakespeare yet the first fairies (a.k.a. "fair folk") are in fact very Elf like. They do not have wings and they're human sized.

In Irish mythology these people are called Tuatha Dé Danann (pron.) (children of the goddess Danu) and in the later folklore they became are the Aos Sí (pron.) or (Daoine) Sídhe. Sídhe in itself is Irish and means hills or burial mounds, suggesting that they came from the land of the dead. The Aos Sí were able to go back and forth between the Earth and Tír na nÓg (pron.), the "Land of the Young" or the Celtic Otherworld and the mounds were said to be gates to it.

The Irish mythology has four cycles in it – the Mythological, Ulster, Fenian and Historical ones. Out of these the Tuatha Dé Danann are first mentioned in the Lebor Gabála Érenn (Book of Invasions). However, while the stories tell about the pre-Christian deities that the Aos Sí were at first, it was common for the literate converters to insert their own beliefs into the local faith; in other words, the stories cannot be read as purely pre-Christian texts. They eventually became more like a supernatural race.

The Welsh mythology had similar people called the Tylwyth Teg (pron.), also known as Bendith y Mamau (Blessing of the Mothers). The earliest known record of them is made by by the medieval poet Dafydd ap Gwilym.